We finally made it to the highlights of the Revolutionary History segment of our trip. We started the day with a tour of Independence Hall. I think Shayna was really excited to see the main room where it all happened. The only original artifact is George Washington’s chair at the front of the room.

The tour is led by one of the rangers who had us all sitting in a room discussing what resources we would need to start a revolution in today’s world and then compare that to how things happened in the 1700s; definitely a novel approach to discussing how the Declaration of Independence developed. Then we walked through one of the courtrooms and then into the chamber where the Declaration of Independence was designed and signed. 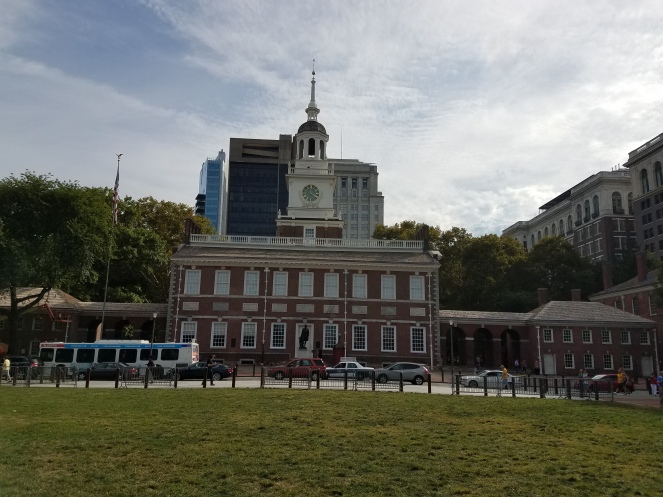 After that we fit in a tour of the Philadelphia Mint. It is a self guided tour with descriptions that discuss all of the steps and equipment used to produce coins, all set up around the windows that let you look into the working factory. It was really interesting!

By the time we were done it was already time for lunch so we walked over to Reading Terminal Market. It was packed! But we enjoyed a sandwich and some fresh pretzels.

From there we walked back to the new American Revolution Museum. There is so much to see that one ticket lets you in 2 consecutive days. This museum just opened in April, it is so new it still has that “new museum” smell! You enter the main exhibit through a door titled “Concord” and exit through a door titled “Yorktown”. Clever! We covered about 1/2 of it before it closed. The exhibits are incredibly informative with lots of preserved artifacts, including George Washington’s tent – that was cool!