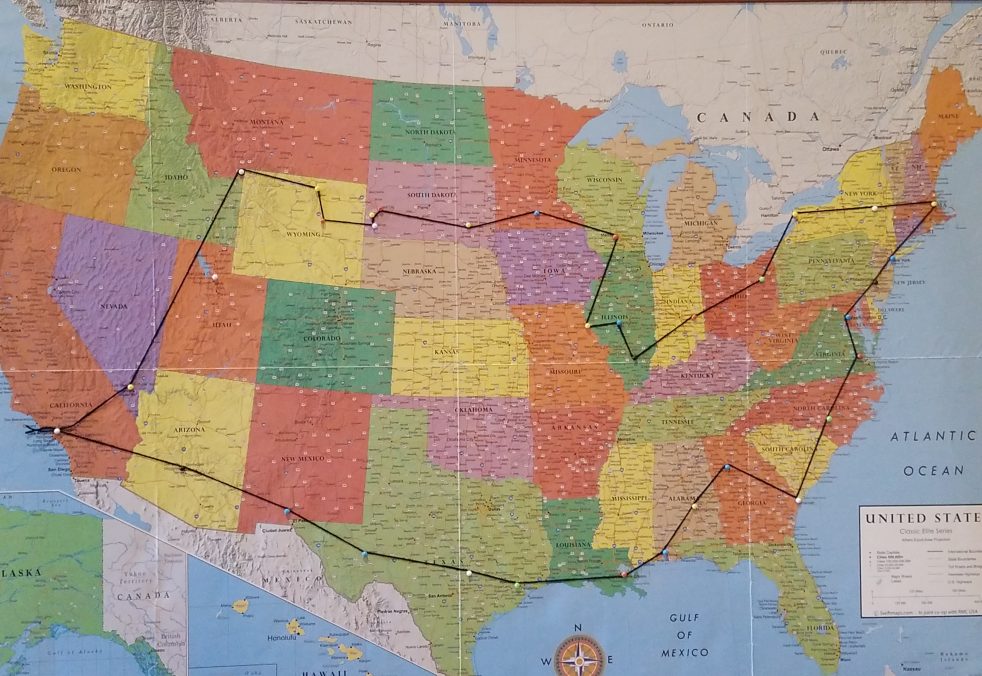 On Tuesday we headed up the highway in the opposite direction from Selma to the town of Tuskegee. Our first destination was the National Historic site of the Tuskegee Airman Museum. It is located at the airfield where the Tuskegee airmen trained and the museum is set up in the two “original” hangars (one burned down in the 80’s and was rebuilt). 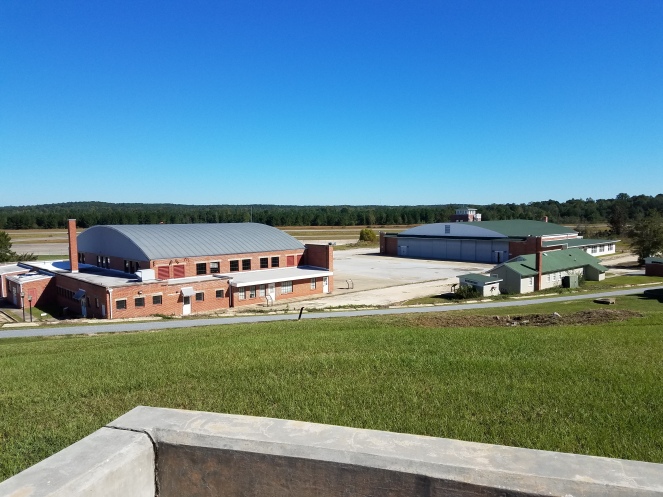 Most of the original buildings are on the grounds so you can walk around and read the descriptions. Inside the hangars are detailed exhibit (and a video) about the history behind the creation of the first African American Air Corp.,  and the support crews, their training, their combat stories and biographies of what they accomplished after the war. There are multiple video displays to watch with first person accounts of their experiences.

The exhibits not only highlight the incredible accomplishments of these pilots and the influence they had on the integration of the military, but also the struggles discrimination, and racism they faced from inside and outside the military. The displays highlighted how their efforts to challenge the separate and not equal conditions they endured contributed to the Civil Rights movement. Because of their accomplishments and experiences as successful pilots within a hostile military environment they felt less intimidated by the racism they encountered on the streets and became leaders in many of the Civil Rights activities. The displays included many biographies about these men and women and their post war accomplishments as African American pioneers and successful leaders in their industries – engineering, nursing, aviation and politics.  There was so much information and it was all so intriguing that we were shocked when we looked at our watch and saw over 2.5 hours had passed.

Next we drove over to the Tuskegee University campus which is also a National Historic site, to visit the George Washington Carver Museum. 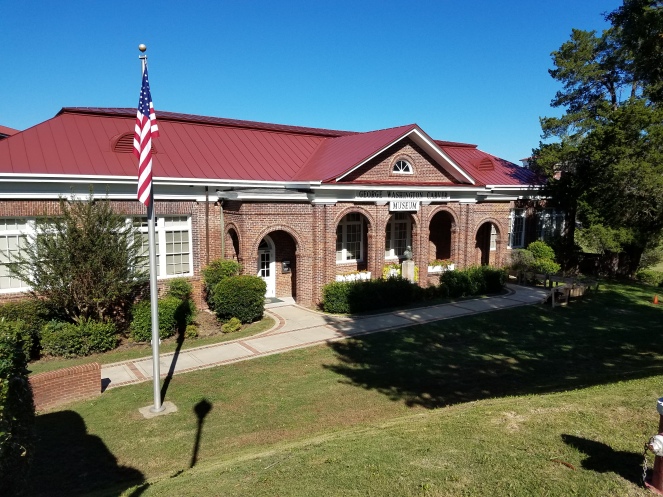 The home of the first president of the University, Booker T. Washington, is a part of the National Historic Site, but it is no longer open for tours. Not sure if it is being renovated.

The museum exhibits provide a detailed history of the life and accomplishments of George Washington Carver and through the displays you learn a bit about the role that the University played in not only providing higher education for African Americans but also helping to improve the lives of the people in the surrounding community. Carver created a moving school, a wagon built by the University students, and took his education out to the neighborhoods to educate farmers on better farming techniques and how to use the resources available to them. (Carver was an expert at creating useful items out of natural resources and discarded material.) On campus he also held yearly, week long conferences, to educate and train farmers on better farming techniques like rotating crops and how to use their crop yields for creating other foods stuff and materials like peanut oil as medicine and sweet potatoes for color dye.

As a dietitian I was particularly interested in his work with food and crops. One of the exhibits explained how Carver’s introduction and use of peanut, soybean and sweet potato crops have influenced current work at the University. The University has received three consecutive 5-year grants to provide research and resources for creating sustainable food options for NASA space exploration. Fascinating!! 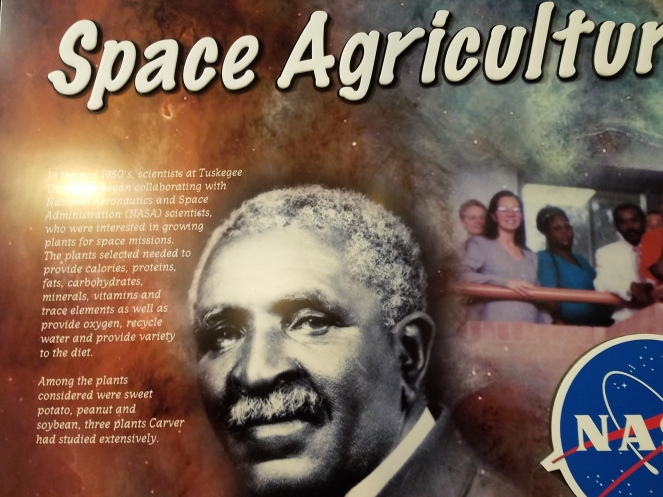 After the museum we walked back toward our car through the campus which is beautiful. It is a private university of 3100 students, 90% are African American, and is known for its engineering and agricultural programs. 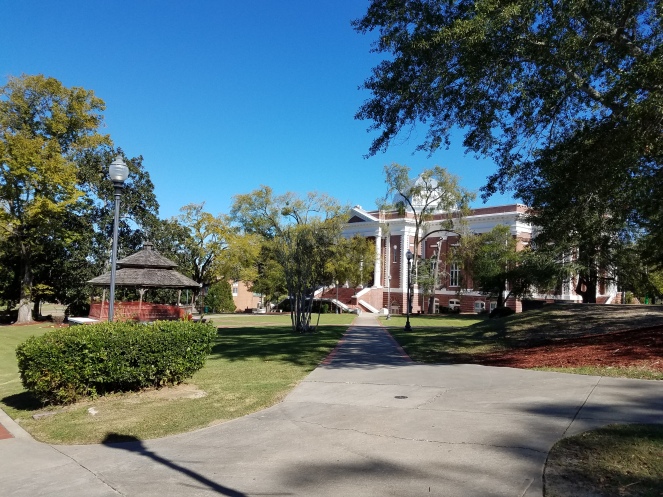 After a nice weekend of hanging with family in Jasper, Georgia on Sunday we drove down to Montgomery, Alabama which was our base for the next few days. We were staying downtown and it was super quiet on Sunday night, but turns out their downtown just isn’t that busy or crowded (by California standards) at any time.

Montgomery was a focal point of Civil Rights activities in the 1950’s and 1960’s, so there was a lot to see. We started on Monday driving the 50 miles to Selma, Alabama to explore the now National Historic Trail of the Selma to Montgomery March. We started in Selma at the National Park’s Selma Interpretive Center. We started with watching a video on the 3rd floor of the building (did I mention before there is always a video?). From the video room you can see the Edmund Pettus Bridge out the window. 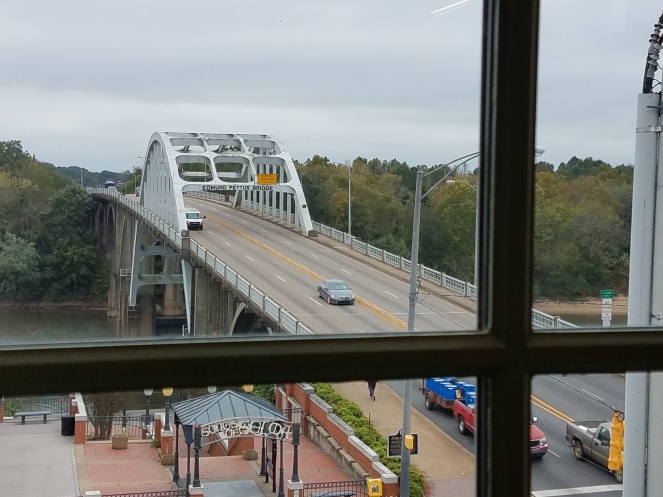 That floor also had an exhibit of photographs from the 50 year anniversary Selma Montgomery March and portraits of some of the key figureheads who attended including Rev. William Barber, who gave that amazing speech at the 2016 DNC.

As you move down to the second and first floors there are various exhibits describing the key players and events leading up to and what happened the weeks of the Selma Montgomery March. (There was one video of a woman explaining that the Marchers were paid to show up and the March was really just a big party – sound familiar?) It provided a detailed explanation of that time period, so we left feeling well versed in the events of those days.

From there we drove around Selma a bit to see a couple highlights, the Jewish temple 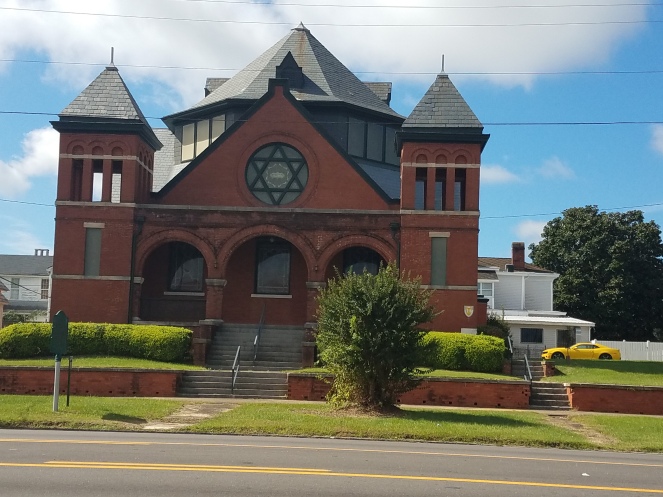 and a very Southern looking cemetery (lots of confederate flags). We did not feel too comfortable walking around so just took some quick pics and moved on. 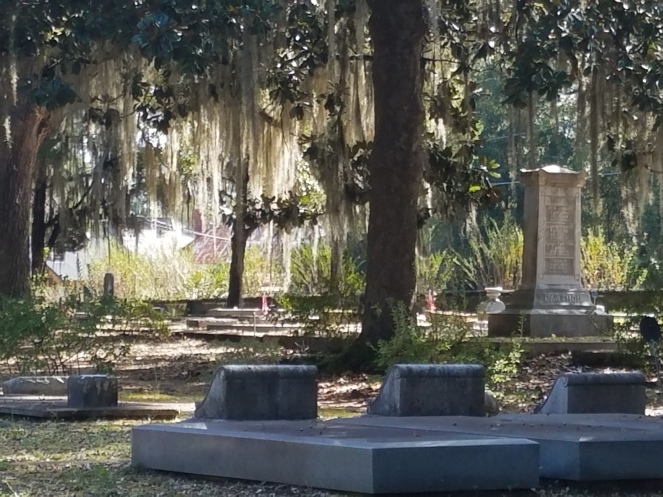 We drove over the Edmund Pettus Bridge and just at the end opposite from Selma is a small park that was designed and dedicated as the Bridge to Freedom Memorial Park. 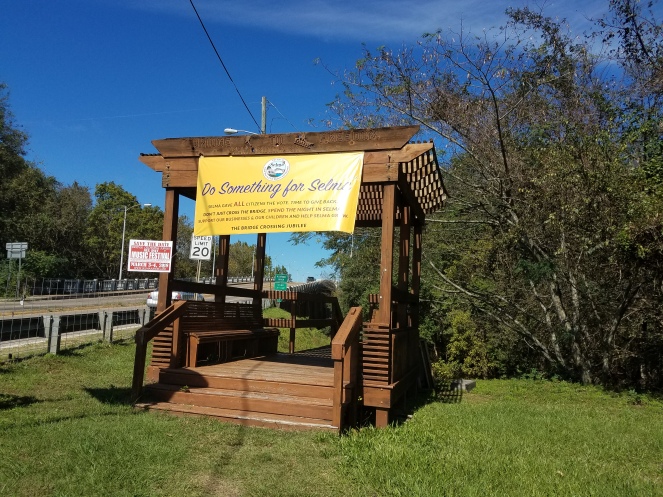 We parked and looked at a couple monuments placed there. Then we saw that there was a woodsy park that had a wooden pathway through it. We did not feel comfortable walking too far, it was a bit eerie, so just walked the closest wooden walkway that went from the entrance, in, then circled back a bit under the bridge back to the entrance. 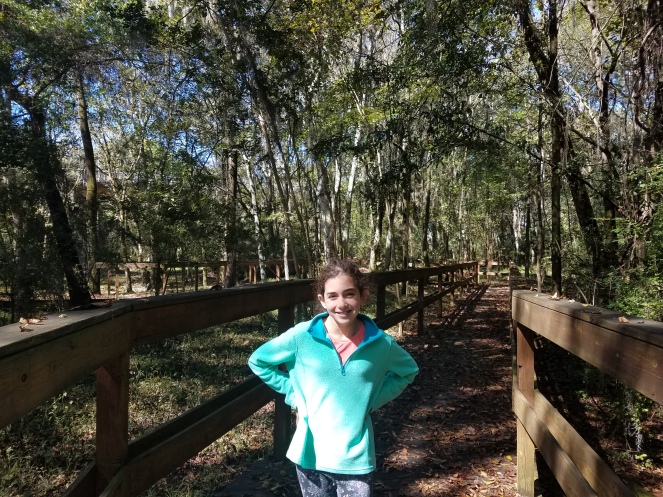 I have to say as we walked under the bridge I stopped, looked up, and I could actually feel the energy of the events that had occurred there. I honestly was not even thinking that deeply about it, but it just hit me as we moved closer to the bridge. It was an unexpected and intense feeling. Shayna and I just kind of looked at each other and remarked on the impact of being there. Another surreal moment.

We then returned to the Historic Trail and started driving back toward Montgomery passing the markers for each of the campsites from the March. There is another Interpretive Center along the trail where we also stopped. In addition to more details about the March, 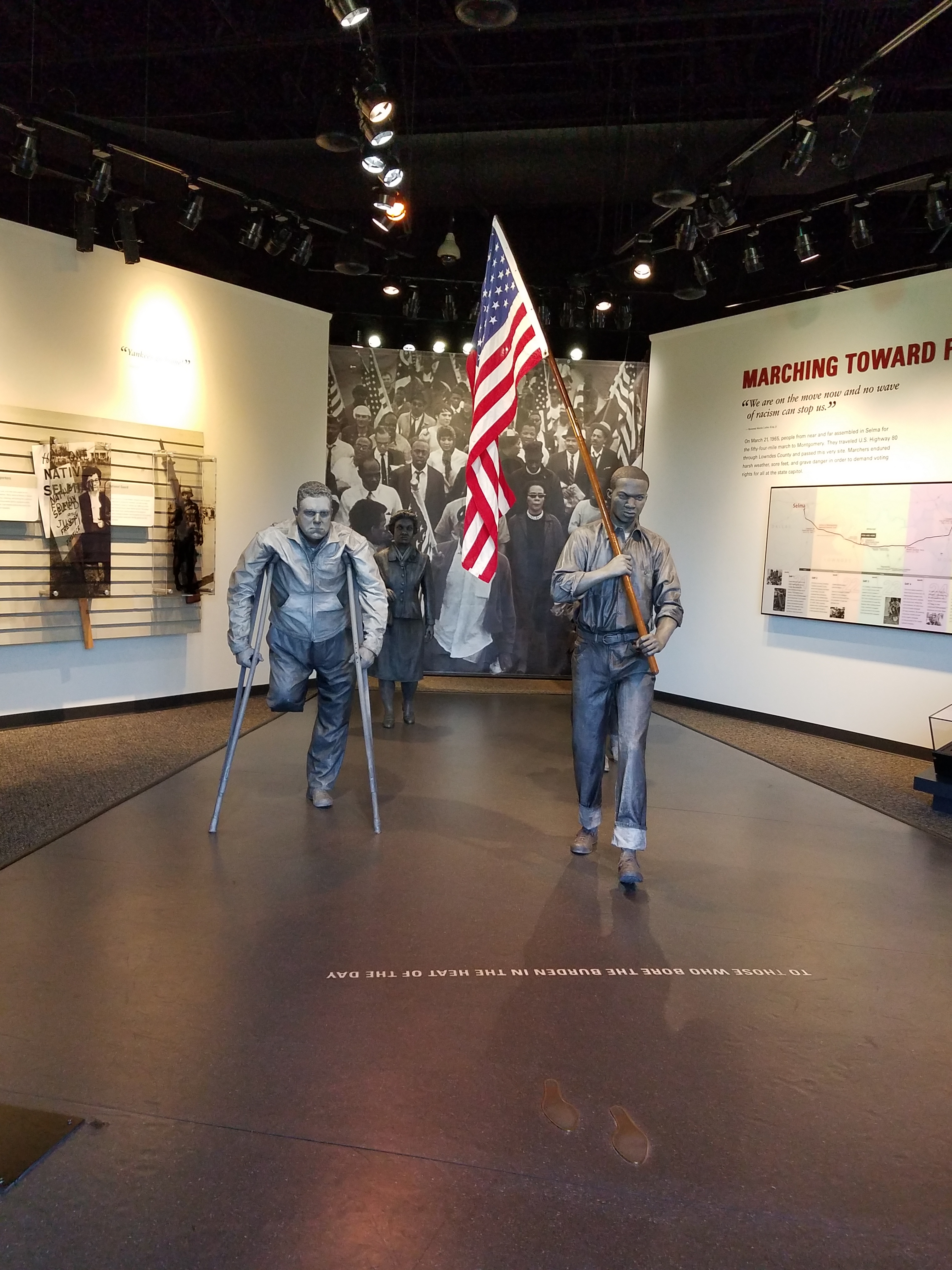 we learned that people from the area who participated or supported the marchers were fired from their jobs and lost their homes. The location of this Interpretive Center is the location that in 1965 became a tent city for the families that had lost their homes and employment. The amount of violence and discrimination that was happening in this area is incredibly scary and it is disheartening that is was happening such a short time ago. I was explaining to Shayna that even though 50 years seems like a long time, in terms of social change, it is not such a long time. Not only does it feel quite recent in terms of the history we have been studying, it makes sense why we are still encountering so much racism and discrimination today. People who were a part of that history are still alive and their shared experiences and beliefs persist.

We arrived back to Montgomery with enough time to go visit the Civil Rights Memorial and Center which is run by the Southern Poverty Law Center. This memorial was also designed by Maya Lin, the woman who designed the Vietnam Memorial.

It is a small space (the original SPLC office space). We had about 30 minutes to visit and it was just enough time. There was a video (did I mention there is always a video) describing the significance of the design of the memorial and the Center, which is to highlight 40 people whose lives where taken in the name of Civil Rights. (They were not the only people whose lives were destroyed by the conditions of that time period, but rather, there were 3 criteria set to identify these 40 people, that they were murdered because of their activities in the Civil Rights movement, they were killed as an act of intimidation, or their deaths played a role in galvanizing the movement.)

Shayna and I signed a pledge of tolerance and added our names to the Wall of Tolerance. 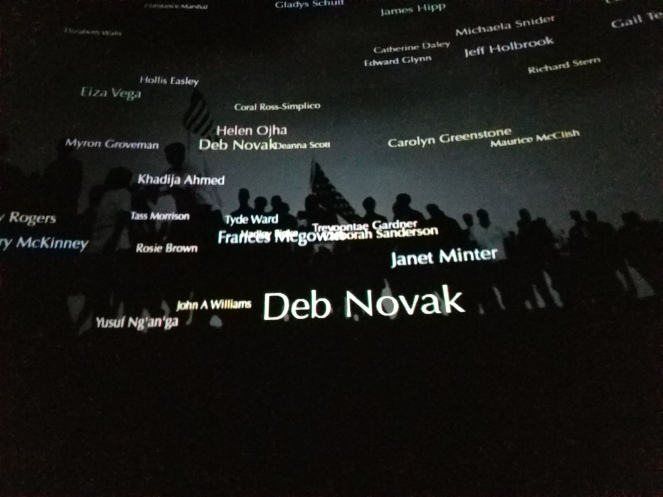