It was a relaxing weekend, taking our time getting up and out each day. We started the day wandering around the French Quarter checking out the antique and tourists shops. Our goal for lunch was my family’s favorite, The ACME Oyster Co, but turns out the line was a bit longer than we expected so we had to skip it so we would have time to eat and get to our activity for the day, a swamp tour. 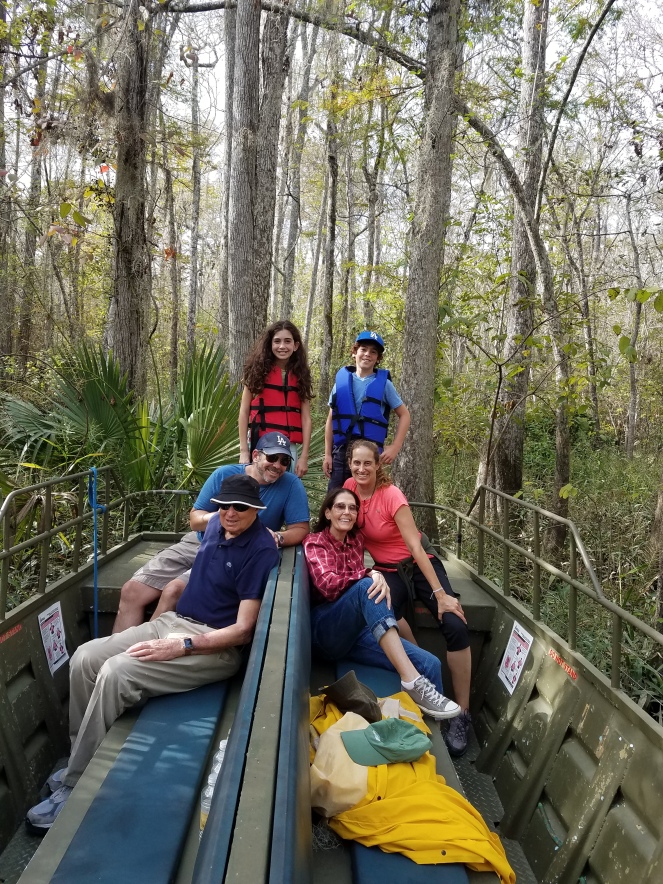 We went with the Pearl River Eco Tour Co. which we highly recommend. Throughout the tour, our guide, John, provided a thorough discussion on the geography, history and ecology of the Louisiana swamp. We were in a small boat which allowed us to travel through some small bayous where we saw plenty of alligators and other wildlife.

Later we had a chance to visit with John again since he plays piano in the hotel where we were staying. We had dinner at a local very casual venue called Mother’s for some real home cooking of jambalaya, red beans and rice, and etouffee so that we could make it back to the hotel in time for the Halloween Parade.

It is about as close to a Mardi Gras parade experience you can have outside of Mardi Gras. Some local women were standing next to us and told us all the ins and outs of parade traditions and etiquette. It was definitely a bonus event for our weekend that we had not planned for.

Then we split up. Michael, Eli, Mary Ann and Shelley went to the WW II museum, which is also a must see. Shayna and I opted to walk around the French Quarter a bit more and when it started raining we hopped on the St. Charles trolley to see the Garden District. We ended the day with another great meal at a restaurant called Peche.

On Monday morning we had a tearful parting as we started our drive home, heading west on Highway 10 until it ends –  Only 1900 miles to go!

From Montgomery we drove to Mobile or rather to a small town just outside Mobile, Spanish Fort, and spent the night at a motel. We were up early for our drive to New Orleans, but stopped in a small town in Mississippi, Moss Landing, to do our laundry. Our one hour in Mississippi definitely provided some insight into life there.

We arrived at our hotel in New Orleans where we were meeting Michael, Eli and Grandma Mary and Grandpa Shelly. We referred to this weekend as the Grand Finale of our trip. We were so excited to be with family! Our goal for the weekend was to eat our way through the city.

On Friday we had reservations to visit the Whitney Plantation which just opened a couple years ago. The plantation has been restored and designed as a tribute to the enslaved. Our tour guide, Courtney, was a descendant of people enslaved at the Whitney Plantation. She provided an eye opening and thought provoking presentation of life on the plantation from the perspective of the enslaved.

Courtney and I had an insightful discussion about slavery. While we had been at the Civil War re-enactment one of the players had explained to Shayna that the Civil War was not really about slavery but rather taxes. He made two comments that stood out to me, one, that 95% of slaves in the south were content with their Master’s, that abusive Master’s were the exception, and second, he argued that if the war had been about slavery why had slaves fought for the South? So, I asked Courtney for her reaction to those comments. She basically explained that those are not unusual arguments heard in the South. However, she argued, slavery is inhumane regardless of how “nice” or cruel slave owners were and that slaves were often forced to fight in the war in place of or in addition to their owners.

The Whitney Plantation is a “must see” if you are ever in New Orleans. It provides an honest and uncensored history of plantation life. As well, we talked about what happened once the slaves were freed after the war. Some families remained working for plantation owners up to the 1970s, which again provided some insight into the current struggles still faced by African Americans in our society.

We had lunch a few miles down the street at a local restaurant which has mostly long tables covered with plastic for crab/shrimp/crawfish boils. Unfortunately it is not crawfish season so that option was out. We could have had some fresh soft shelled crabs but I was too hungry to mess with all that. Shayna and Eli did try some alligator. We all ate light so that we would be hungry for our dinner at one of the New Orleans trendy restaurants where we enjoyed oysters and etouffee.